Effectiveness of CBD in Osteoporosis, Can it help YOU?

Effectiveness of CBD in Osteoporosis, Can it help YOU?

Osteoporosis –  literally by definition means ‘porous bones’. Porous bones are weak and fragile bones due to the loss of tissue which occurs due to hormonal changes in the body and by a deficiency of vitamin Dd in the body. With a reduced bone density, they are easy to fracture and often may deform the physical structure of the body, such as that in spine deformities. This condition is effectively managed if the patient is supplementing with CBD. 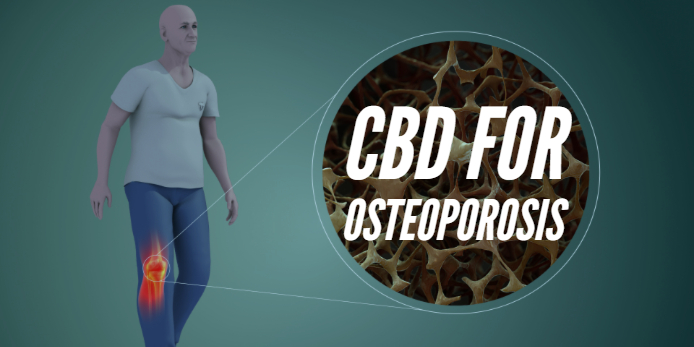 The Use of CBD for Bone Metabolism

Here’s what we know:

- CB1, CB2, TRPV1 and GPR55 receptors are known to be found in the skeleton

Diagnosis and Early Signs of Osteoporosis

Bone health is measured by bone density. Our peak bone mass is reached by the age of 30. This is where they reach their maximum strength and density. After which, we experience the decline.  After we hit 30(approximately) our bodies begin to reabsorb bone faster than new bone can be developed. Also with age, our bodies reabsorb calcium and other minerals from our bones. The reabsorption makes our bones weak and oftentimes leads to osteopenia and osteoporosis. The vulnerability within our bones becomes clear with each new injury and fracture.

The most reliable way to diagnose osteoporosis is to have your bone density measured. This is done utilizing a dual-energy absorptiometry scan which is referred to as a DXA scan. A DXA scan is a brief and painless scan which accurately measures bone mineral density. (BMD)

Bone mineral density(BMD) is related to bone strength. A bone density scan, or test, is not the same as a bone scan. A bone scan is used to find tumors, cancer, infections of the bone and fractures. It has been said that almost 80% of a persons bone density is determined by genetics. The other 20% is determined by a person’s lifestyle.

Can CBD help YOU?

Metabolism in bones helps in mineralizing the bones to renew them after they have been worn, out. Athletes will find tissues can become worn over time and can this leads to pain in the joints. When there is this pain, downtime is required for the tissues to remodel and be able to regenerate. This is normal metabolism. However, in some instances, the tissues don’t regenerate, and therefore the pain and damage can continue and worsen.

In a recent study, the compound CBD was studied in mice, and it was found that there is the occurrence of the skeletal endocannabinoid system, and this suggests that it has an important role in the regulation of skeletal metabolism, therefore the same in human body bone structure and function. The use of CBD has the potential to help as a therapy in the patients with a bone structure that has problems with the metabolism processes. Further, these reports represent/ demonstrate that there is potential for developing a CBD based anabolic for use against osteoporosis and also to diagnose osteoporosis polymorphisms.

Medical marijuana is proving to be a safer and more effective medicine for the treatment and prevention of osteoporosis than current available treatments. This post from The Marijuana Times clears the air on the ability of CBD to prevent osteoporosis.

At present, bisphosphonates are the approved medications to prevent and treat osteoporosis. To treat osteoporosis, those afflicted with osteoporosis have to suffer moderate to serious side effects of these drugs, which include esophageal inflammation, nausea, abnormal heart beat, and even bone damage of the jaw. Even if someone is ready to tolerate these side effects, apparently there are no treatment benefits in the long run. Yes, after five years or so, the patient runs the risk of developing brittle bones or related bone fracture, even if the patient is put on bisphosphonates treatment.

Given these undesirable, serious side effects and inefficacy, a safer and effective alternative is being sought after by the patients, as well as the medical research community.

In most biological organisms, including humans, the presence of functional endocannabinoids and their potential physiological roles were discovered way back. Recently, researchers have discovered the presence of cannabinoid receptors in bone tissues. CB2 is predominantly expressed in osteoblasts (bone-forming cells) and osteoclasts (bone resorbing cells). It has been shown that cannabinoid receptors are vital for regulation of bone metabolism. Physiologically, the balance between osteoblasts and osteoclasts is vital for maintenance of optimal bone health. As we age, the balance gets impaired, and leads to bone density loss and osteoporosis.

CB2 is predominantly expressed in osteoclasts, osteoblasts and osteocytes. CB2 agonists, including cannabidiol, can modulate these receptors’ functions and notably, CBD does not possess psychotrophic effects. These agonists enhance osteoblast count and activity while inhibiting osteoclast precursor proliferation and expression of osteoblasts. These propertiesfacilitate stimulation of endocortical bone formation, suppression of bone loss and help the body to maintain normal bone mass.

Among these receptors, Cnr2 is one of the main cannabinoid receptors that regulate bone metabolism. Deficits in expression of Cnr2 are linked with low bone mineral density and bone loss. Activation of CB2 receptors inhibits bone loss in experimental animals, while CB1 activation in sympathetic nerve terminals has resulted in suppression of noradrenaline release, and thus balancing tonic sympathetic restrain of osteogenesis. This evidence points to the irrefutable role of cannabinoid receptors in bone health and maintenance.

Based on this evidence, a follow-up study has shown that activation of CB2 receptors significantly reduced experimentally-induced bone loss and improved bone formation. Researchers now confirm the functional involvement of CB2 receptors in the maintenance of bone metabolism and bone-protective benefits against age-related bone loss disorders, including osteoporosis.

Thus, the involvement of CB2 receptors and signaling in bone formation and maintenance is now clear, which may serve as a potential therapeutic target to treat osteoporosis.

CBD as a Treatment for Osteoporosis

Based on this review, we can see that CB2 modulation by agonists could be a potential therapeutic approach to treat bone disorders, including osteoporosis.

Upon researching the scientific evidence, the potential use of cannabinoids to prevent the onset of osteoporosis began two decades ago. Since then, no notable study has been done to investigate the therapeutic benefit of cannabis for brittle bones.

In vitro studies have demonstrated that minimal concentration of cannabinoids could activate osteoclasts via hemostatic regulation of endocannabinoid production and expression of CB2 receptors.

With these benefits, oral CB2 agonists could be potentially employed as an anti-resorptive and bone-forming therapy for osteoporosis patients.

Bone fracture (pathological) associated with osteoporosis is a problem that maims many of the elderly patients. Experimental research studies have shown that CBD can help fractured bone heal faster, and also halt the progression of osteoporosis.

As of now, no approved drugs are available to aid the healing of fractures. In accordance with the animal studies, cannabis hastened the healing process after bone fractures in humans. Additionally, the pain-relieving properties of cannabis could be helpful to calm down the ache, sharp pains and inflammation that accompany the broken bone.

Recently, an Israeli study has proven that CBD treatment has the ability to promote healing in broken bones. According to the study, CBD remarkably enhanced the biomechanical properties of healing femoral bone after 8 weeks of treatment. In the study, CBD was shown to achieve these benefits by stimulating mRNA expression of the bone-forming genes and enzymes, including lysyl hydroxylase, that are involved in collagen crosslinking and stabilization processes. These biochemical events aid the improvement of biomechanical properties of fractured bone. However, these benefits were not evident in THC-treated experimental animals

So, it’s now clear that CBD not only treats/prevents osteoporosis, but also the related complications, including pathological bone fracture as a result of bone loss.

This research evidence points out the key role of cannabinoid receptors in bone turnover and healing processes. Although human clinical trials are yet to be initiated in these patients, it appears that cannabis use or cannabinoids could be helpful for the prevention of osteoporosis. Compared to existing treatments, cannabis may be a safer and more effective treatment option for osteoporosis.

As there are no effective and safe treatments available for this unmet need, we are delighted to see these under-explored benefits of cannabis.

Based on those findings from the study, it is concrete to say that CBD will help as a therapy if it is used in people with bone-related problems.