Terpenes 101: What Are They And What Do They Do?

The fragrances of pine trees, moss, ferns, and flowers harmoniously come together to instill a sense of calm restoration. To explain this, many of the plant-related scents come from naturally occurring chemicals called terpenes. 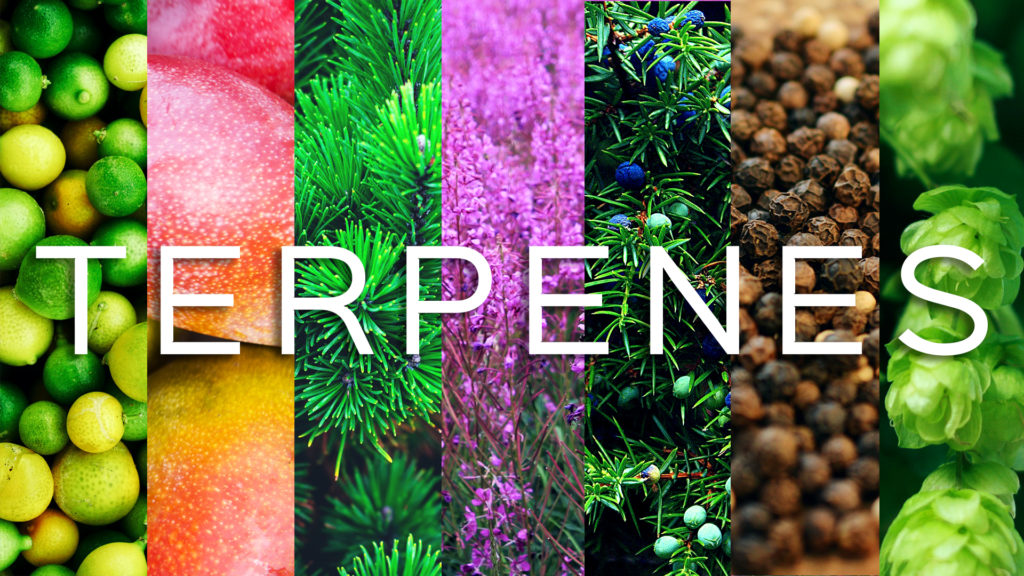 Terpenes or terpenoids are aromatic metabolites found in the oils of all plants. These are aromatic organic hydrocarbons found in some insects too. In existence, there are more than 20,000 terpenes and at least 100 produced by the cannabis plant.

In extracting terpenes for industrial use in the cannabis industry, companies can choose from using cannabis-derived or hemp-derived terpenes. Hemp is a variety of Cannabis sativa, often grown specifically for other industrial or fiber uses, although medicinal products containing Cannabidiol (CBD) extracted from hemp have become more pervasive. Hemp is known for the remarkable tensile strength of its fibers but possesses significantly lower quantities of terpenes and cannabinoids than cannabis.

For people familiar with essential oil, they already have some experience with terpenes since they are found in high quantities in various essential oils.

What can we get from terpenes?

A 2011 paper by researcher and neurologist Dr. Ethan Russo described the way cannabinoids and terpenes work together to modulate and boost the effects of one another in the body's endocannabinoid system (ECS).

In the past, tetrahydrocannabinol (THC) was considered the only chemical of psychoactive importance in cannabis. Russo helped in discovering how other cannabinoids and terpenes can either decrease or increase the effects of other chemicals in the body and THC that interact with the ECS.

Myrcene, a type of terpene, may increase the likelihood of the effects of THC, it provides anti-inflammatory, induces sedation, and potentially anti-cancer and analgesic effects. Meanwhile, limonene is regarded as an energizing antidepressant compound in aromatherapy.

Terpenes are a natural spice kit aside from being Mother Nature's medical cabinet. In addition, the smell of terpenes is helpful for guiding people toward the cannabis their body wants.

In the same paper by Dr. Russo, it was revealed that terpenes “could produce synergy for the treatment of pain, depression, cancer, inflammation, addiction, anxiety, epilepsy, fungal and bacterial infections.” The essential oils revolution has brought with it awareness and scientific research of the medical benefits of aromatherapy and terpenes. Nearly all of the major terpenes in cannabis are either anti-inflammatory or analgesic.

There are hundreds of terpenes in cannabis, but here are some of the most abundant terpenes found in cannabis flowers today.

Myrcene – this is the most commonly found terpene, a study showed that myrcene makes up about 65% of the total terpene profile in some strains. Its smell often reminds us of musky notes, earthy, similar to cloves and it also has a fruity, grape-like smell. This is supposedly useful in decreasing chronic pain and inflammation, which is why it is usually recommended as a supplement during cancer treatments.

Limonene - although not all strains necessarily have it, it is the second most abundant terpene. Limonene produces a citrusy smell that resembles lemons, which is no surprise as all citrus fruits contain large amounts of this compound. Limonene is used in cleaning products and in cosmetics. Researchers claim that it has antibacterial and anti-fungal properties as well.

Linalool – this can be found in cinnamon, lavender, mint, and coriander. Just like those aromatic herbs, linalool also produces relaxation and sedation. Patients suffering from depression, arthritis, insomnia, seizures, and even cancer, have all found relief with this terpene.

Caryophyllene - best known for its peppery and spicy note. This can also be found in spices like oregano, basil, rosemary, cinnamon, black pepper, and cloves. This is the only terpene that binds to cannabinoid receptors. Aside from its anxiolytic and analgesic properties, some studies have found that caryophyllene has a very promising role in alcohol rehabilitation.

Alpha-pinene and Beta-pinene - these terpenes smell like pine trees which is also where they can be found in large amounts. Like many other terpenes, these also have an anti-inflammatory effects. They help improve the respiratory functions and airflow, while helping reduce memory loss related to excessive THC intake.

Terpenes and Cannabidiol have many similar things in common and both have specific purposes, however, they are still very different. When terpenes and cannabinoids are combined, people can get the “entourage effect.” This effect describes how different cannabinoids and terpenes are, often referred to as terpenoids.

It is often difficult to be able to retain terpenes in CBD oil as it may quickly disappear during the CBD extraction process. It is important for manufacturing companies to carefully control the production of CBD oil to make sure that terpenes remain in the final product. When it does, it will work in harmony to enhance their therapeutic benefits.